So you came here to check how deep the rabbit hole can be, we warn you it can be very deep, probably an octave lower standard E tuning deep! 😉

There is something… in fact there has always been something in down-tuning that fascinated every guitarist. One would say, it definitely started with Korn… after then others can mention that in a studio when recording Elvis always wanted to go deeper on tone… and if we turn several pages back in the history book, then we can find the baritone Theorbo. So we can assume the down-tuning, the deep rhythmic sounds and the pulsating of the bassy sound were always a thing -not only for mankind, but also for- guitarist.

Here at GV guitars we hear your voice, feel your struggle, and understand your urge for going deeper. So let’s dig in. And take a deep dive into the world of down-tuned /baritone/ bass like guitars.

Long before the first mass produced baritone guitar there was a thing called Guitarrón mexicano which is a guitar like instrument derived from a 16th century Bajo de Uña. Guitarrón looks like an enormous acoustic guitar, but it is fretless and it is usually tuned to A1-D2-G2-C3-E4-A2. Used Mostly in Mariachi bands as bass/rhythm instrument. This instrument served as inspiration for Danelectro to create their baritone models in the 1950’s.

Later many companies like Gibson, Gretsch, Guyatone followed soon. Some years later, the definition of modern baritone guitar started to rise. The main feature of a baritone guitar is it’s scale, which should be at least 27” most common baritone tunings are A-D-G-C-e-a and B-E-A-D-f#-b. Many bands and musicians start to experiment with these instruments. Probably one of the most known song which was played on baritone was played by Eddy Duane, called “Peter Gunn”

The Fender VI—aka the Bass VI—debuted in 1961 as an answer to Danelectro’s UB-2. It raised the baritone game even higher. They basically took every  aspect of the baritones and previous fender guitars and molded it into one instrument. 30” scale, 3 specially modified single pickups, tremolo+whammy bar system, tone modifier switches, the tuning is E-A-D-G-b-e an octave lower than a guitar strung with heavy-gauge wound strings..

They do not refer to it as a baritone guitar, rather as “New six-string Bass Guitar”.  It was a very interesting middle ground between the guitars and basses. It is mostly played with pick, because it is too narrow for playing with fingers like on a bass and a bit wide for guitar (note: for todays standards it is pretty normal though).

The trend to tune lower is still a tendency especially this century. More and more guitar players use extended range guitars and more of these guitars come with extended scales. Now you probably have a question in your mind:

What is the difference between a 7 and 8 string guitar and a baritone?

Most seven strings are Extended Range Guitars and not Baritones, because most are tuned to standard (EADGBE) with the seventh string tuned to a B below the low E. And usually they have scales equal or smaller than 27”.  Usually it’s the same thing with 8 strings, but with added a low F#  strings.  There are longer-scale seven and eight strings (this generally results in a better-sounding low strings), of course, but they generally should  not be referred to as Baritones.”

So if the scale is 27” or higher the only difference is the tuning. Even extended range guitars can be called baritones if the tuning is derived from the standard Baritone tunes. And in fact many musicians do this. The will to tune the guitar deeper is very high in the modern metal scene.

As we already told: We here at GV guitars hear your voice, and understand your urge for going deeper! This is why we decided to blur the line between baritone guitars and the Bass VI style basses. So you could have a modern, precise axe which could be tuned down to earth and even deeper.

Let us introduce you to the new Vincent VI model. First of all, we want you to go really deep, so we thought the 30” scale would fit greatly. We decided to go with our well-known, familiar shape (Vincent). Thus a slight retro vibe will still shine through. Also we kept the option to choose the famous slide switches which are a solid part of every bass VI, but of course we altered their role, so now they will be able choose from split/parallel/single on bridge and select the different coils on the neck pickup. (But if you like the blade  switches more it is an option too) We also kept the standard headstock orientation so strings made by most companies should fit. (Although we prefer Daddario’s EXL 156 -lowE or EXL 157 -for B or A tuning)

On the modern part we thought you won’t really need a fiddly tremolo system for a real djent machine. So,  we reached out to the manufacturer of famous ABM parts and they proposed to use their monorails  (aka single bridges). Since the monorails have a top loading string system, the string change has never been easier. The main advantage of these single bridges is that every note on the string will be clear, understandable and will interfere a lot less with the notes on other strings.

Regarding pickups we also made a big change. Instead of 3 single coils we added two humbuckers from Bare Knuckle Pickups for a modern, punchy and versatile tone. You can even choose from these types: Polymath, Impulse, Silo, Black dog.  All of those were designed with down-tuning kept in mind. For the best result we even added an option to change the standard tone pot for a TBX style tone shaper, so you can have better control of your sound.

The tuners will be crucial for an instrument like this, so we are going for a locking type of course. Since we have good experience with them, we decided to stick with  the Hipshot brand.

We also decided to go with aluminum as the main material for these parts: the pickguard, the control plate and the headstock plate. – which is characteristic for our style. 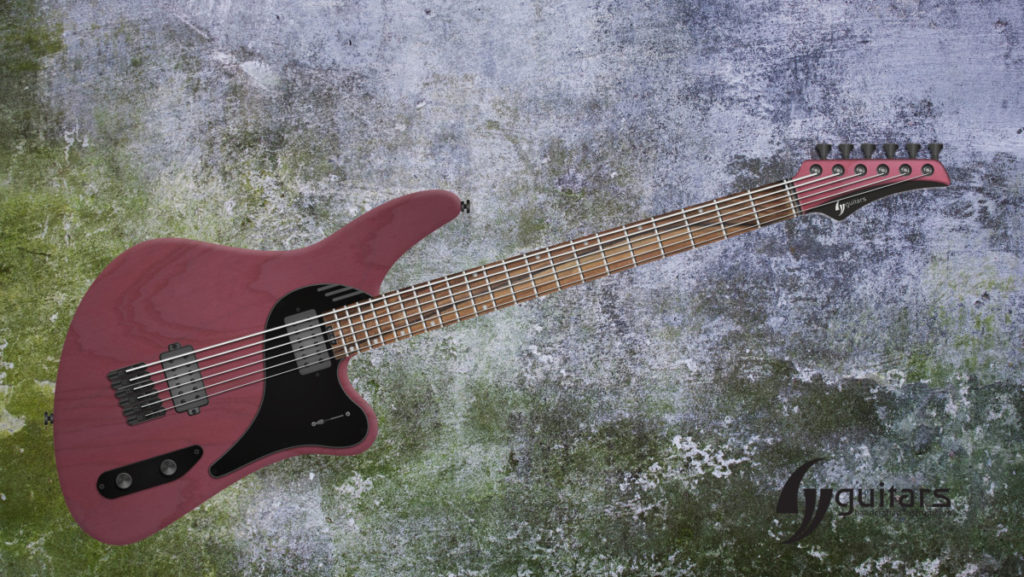 So, let us summarize the main specs:

As you can see, we combined everything you will need to a well articulated,  balanced, deep tone.

If our new Vincent VI model got your attention, we are delighted to inform you that we are planning to make a limited run soon. If you are interested please join our GV guitars Official Facebook group so you don’t miss out on anything regarding the run.

If you do not have a facebook, you can check out our page [coming soon]

This run is  time and slot limited.