GV Blog – Headless guitars… but why?

Everybody talks about them. But what are they? Are they any better? And the most frequently asked: Why would anybody want one? …but mostly…  Do I want one?

Headless guitars (and basses) aren’t a new invention. They’ve existed since the 80’s. The father of these strange guitars was Ned Steinberger. If you think they’re weird, just imagine how they were perceived in the80’s.
Whether you like them or not, they’re back, “bigger” and better than ever before. Here at GV Guitars, we also have a headless model called Syrius. Are you interested in headless guitars, or do you want to know more? In this article we’ll answer the most frequent questions about this masterpiece.

Why do most guitars have headstock?

The first guitars were almost entirely made from wood. To create the tension needed for the strings,  special mechanics had to be invented. The first tuners were basically just wooden pins, that were placed in the headstock. Creating bridge tuners back then was very hard, impossible even. This is why our brain tells us that guitars must have a headstock.

Why do some guitars have no headstock?

Not having a headstock became a thing in the 70’s and 80’s, when electric guitars became more and more popular. Most luthiers and designers started to shave down the instrument as much as possible. This procedure involved breaking most traditions, thus it included omitting the headstock as well. Most of these new designs were extremely radical. Nowadays headless instruments are not only functional, but they can also be aesthetically pleasing. Today, not having a headstock is mostly a design choice, but, it also has its benefits. For example, they’re lighter than common guitars, which is an important aspect of an ergonomic instrument.

Not necessarily. They’re  just different: less traditional, more progressive and modern. An increasing number of manufacturers are starting to include headless instruments into their repertoire, and  GV Guitars is no exception.  We already mentioned our headless model, Syrius.

Are there any benefits to a headless guitar?

Without the weight of a headstock (and tuners!) the instrument can be lighter, but it creates a different center of gravity, which can take some time to get used to, but it’s definitely worth it. The lack of weight at the headstock means that the odds of the guitar surviving a fall without damage is  higher. Also, there is no headstock which could break off. Another perk is that because it’s lighter than its conventional version, you’ll have less pressure on your shoulder while wearing a strap.

How does a headless guitar work?

Unlike on common guitars where the tuners are placed on the headstock, on a headless guitar or bass the strings are fixed just beyond the nut, so having a guitar head isn’t necessary. The strings then go over the nut, up the neck, over the bridge, and are connected to tuners on the body. This allows easier and quicker string changes, so there’s no more fiddling with strings around the tuners. Just insert the string into the bridge piece and tighten it with a hex-wrench at the other end. Also fine-tuning the pitch is a lot more effortless. 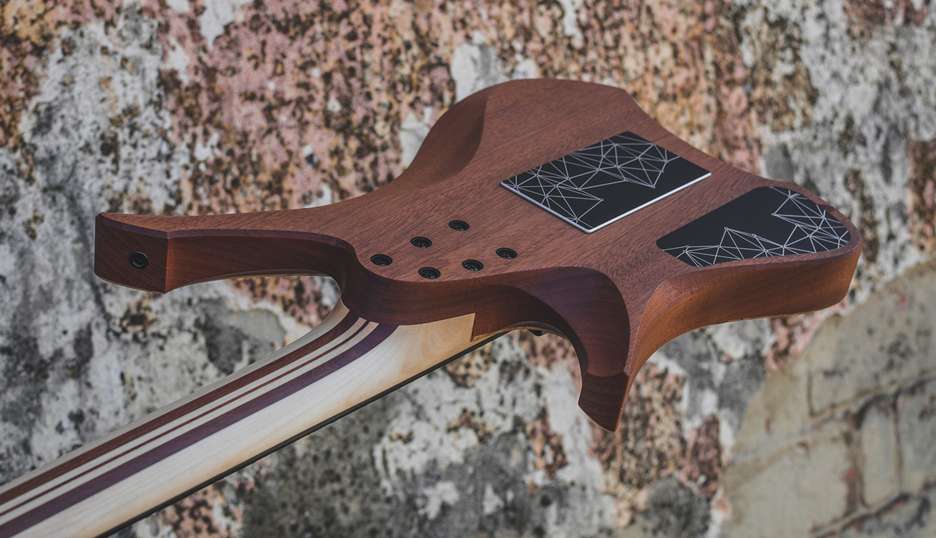 Yes, they can be. Having no headstock means the instrument is shorter, which makes it easier to carry around, and as it was already mentioned, the head part is less fragile. Headless guitars usually also have smaller body shapes as well, which makes them even more compact.

Current virtuosos like Yvette Young, and Plini Marshall both favor these instruments. But legendary musicians like Mark Knopfler, Allan Holdsworth, Eddie Van Halen and Sting have all used headless guitars, as well.

Hope we were able to introduce you to the “headless world” and now you understand what’s the difference between standard and headless guitars.

Do you agree with article? Do you own a headless guitar/bass, what is your experience?